Designed for heating liquids of any composition. Efficiency > 90%

innovative technology: convective heating surfaces are missing, without the deposition of milk stone 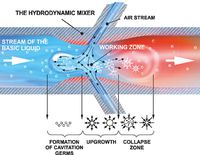 The physical nature of the process which takes place in the equipment consists in the following:

The fluid to be heated is pumped to a special mixer which accelerates it while decreasing the pressure. Simultaneously, jets of the same or another liquid are introduced into the main stream at high speed through nozzles in the mixer walls. As the liquid streams collide, they cause considerable shear stress which brings about liquid cold boiling due to low pressure (so called cavitation effect). This results in creating nucleation sites in the form of micro bubbles which are carried away by the liquid stream, meanwhile growing in size to several millimeters.

On getting to the widening zone with rising pressure the bubbles decrease and collapse. Due to liquid specific properties bubbles collapse asymmetrically, giving rise to cumulative jets which hit the bubble opposite side at high speed.

Any solid particle hit by this jet is actively destroyed (crushed) as pressure in the collapse zone amounts to several tens of thousands of Bars. The shape and form of the mixer where the stress takes place prevent the pressure force pulse affecting its walls, thus not causing the surface destruction (erosion).

Such mass impact with micro hits causes liquid heating, crushing solid particles in it and thus forming emulsions and suspensions.
Any TEKMASH unit is a single and harmonious whole which helps to solve customer's technological problems in the best possible way. TEKMASH equipment versatility is ensured and guaranteed by the company high professional standards in engineering which provide the right business decision. From this point of view cavitation devices described above, important as they are, still do not guarantee the successful operation.